Web3, as the next generation of the Internet is called, is a fast-growing industry, attracting big bucks around the world. In 2021, the inflow of funds here exceeded $25 billion, giving birth to 65 unicorns. Singapore is in the center of the buzz. Through tax incentives and preferences for high tech, the city draws in ambitious entrepreneurs, investors and developers. One of them is Takehito Imai, a Japanese deeply versed in arts and law, leveraging his colorful personal experience to make a change.

In June 2022, XP launched a new project - MIZU DAO, a decentralized autonomous organization with VC features. The project invites experts to invest in and help to develop Web3 projects worldwide. Membership NFTs allow anyone with a crypto wallet to join the club and receive project tokens as a reward.

Since then, the progress has been quite impressive – Takehito presented his project in September 2022 at Token 2049 Singapore, one of the largest Web3 events. Soon after that, in November 2022, MIZU DAO’s first incubator project - D3D Meta, a creator-focused metaverse, is going to be listed on a Singapore crypto exchange Gate.io with over 10 million users.

In this interview, we’re doing a deep dive on the founder Takehito Imai’s attempt of launching MIZU DAO and his future plans, reflecting on his 37-year career story.

Intellectual property lawyer with a background in arts

Born in Kyoto, with both parents working as interior designers, Mr Imai was surrounded by art from as early as he can remember. He recalls his father's handmade dining table and artworks splattered around the house. In childhood, Takehito started playing violin and devoted 18 years to music, which he thinks helped him to develop a certain sensitivity and understanding of fine arts. At the same time, he also could see the less glamorous side of the artistic world.

"Art is an extremely tough industry when you get a glimpse of the world. Even my parents, who had customers from outside Japan too, hardly managed to make a living. I never entertained the idea of having the talent to be an artist, nor had I the passion to pursue a career in that field”, he says.

During his student years, however, Takehito opened himself to the potential and power of art, and tried to figure out what he could do to be useful. For a moment, he wanted to become an architect, but studying physics did not attract him. Through trial and error, he finally found the best way to get involved: the law.

“Thinking about the industry’s structure, I asked myself how artists and entertainers could make some extra money. I clearly saw that middlemen - entertainment agencies, art galleries and advertising companies were in control of their rights. Among all the things I could do to help creators focus on their work and make life easier, legal support was the most obvious choice for me at the time”, Takehito looks back.

His career developed smoothly, from a student to a respected lawyer. After 6 years in the prestigious schools, Komaba Junior and Senior High School of Tsukuba University, he graduated from the Faculty of Law at Tokyo University and passed the bar exam. Next step was joining TMI Associates, a major international law firm in Japan.

Working in the company on projects in entertainment, art and startup fields, he realized that "business and art are inextricably linked". He studied more, combining legal knowledge with industry-specific experience, to become an expert of intellectual property - an IP lawyer. 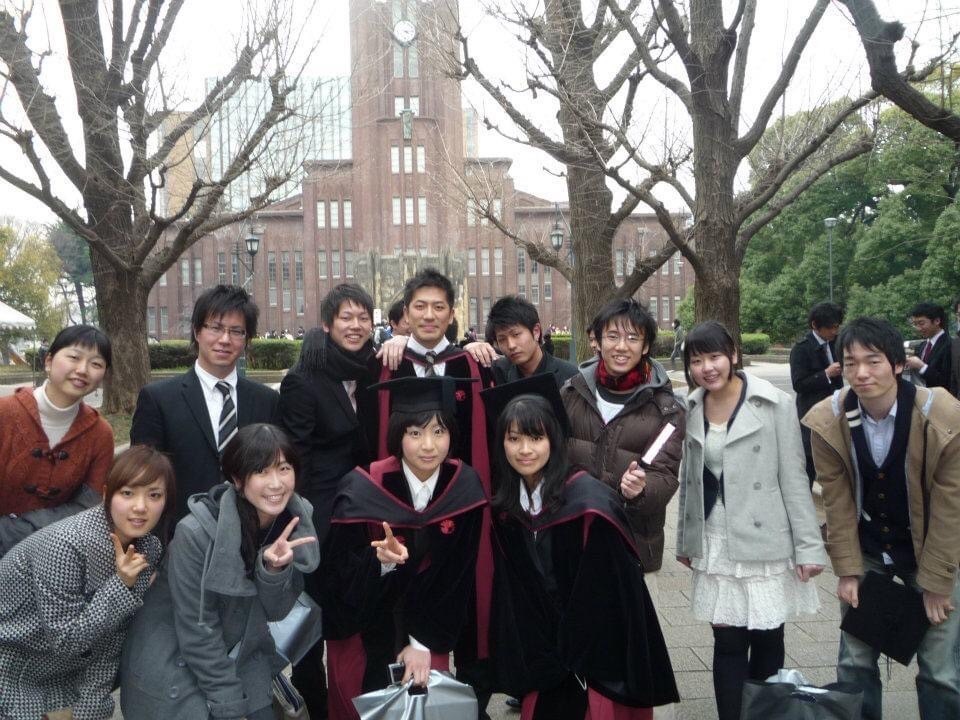 Ginza district, the gateway to Japan

After 3 years in the firm, Takehito felt confident enough to start his own company. The idea was to use opportunities created by the old-fashioned and analog way of working of traditional law firms. Know-how was shared through the apprenticeship system. He had to learn how to fix contracts, litigate and negotiate by watching the backs of his seniors. Takehito, on the contrary, believed that in today's fast-paced world "the laws should be shared digitally and updated constantly.” Moreover, his experience with startups encouraged him to become independent. At a healthcare startup he was sent to work in, he gained first-hand experience of business development, helping him realize his own entrepreneurial talent.

Ginza district in Tokyo was a natural choice for Takehiko to start his own business as he felt it perfect to establish himself as a serious businessman.

“For me at the time, Ginza was ‘the place for adults’ I can only go to with my family. With the aura of luxury and exclusiveness, it was the place I longed to be, but beyond my reach. Startups were already thriving in Shibuya where I spent my school days and was familiar with. Ginza had fewer law firms and startups, so I decided to challenge myself from a completely new angle", he recalls. 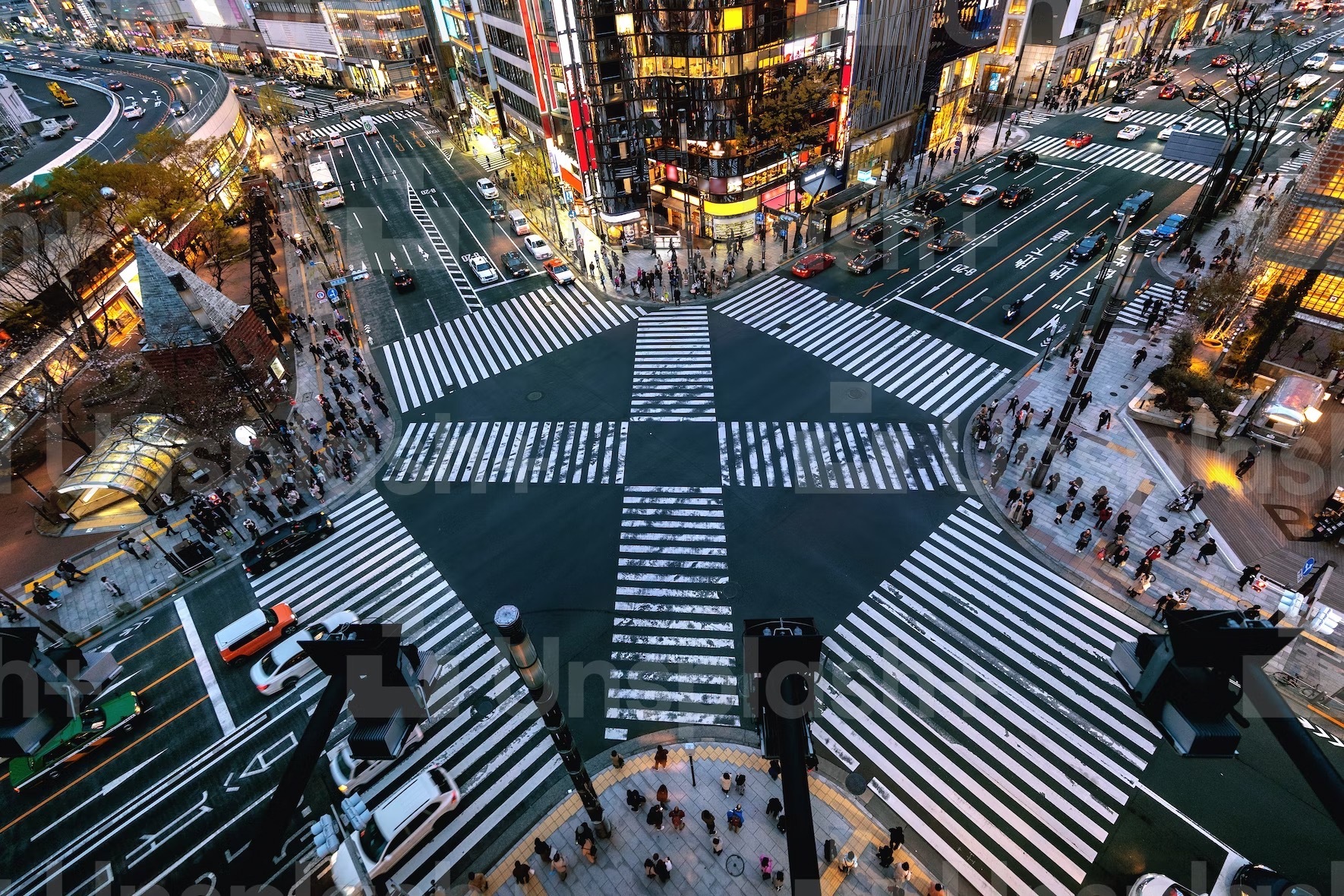 Takehito’s company was launched about a year ago at Ginza and successfully developed its businesses on multiple fronts. Today, a new challenge for Takehito is Web3. The reason, he explains, is that “There were signs that the time had arrived for the ideal forms of organization I had envisioned finally becoming reality".

“As the name X-border Partners suggests, we originally planned to position ourselves as a group of professionals that can overcome the current lack of cross-border activities in Japan and stagnation during Japan's “lost 3 decades”.

To achieve that, Takehito was gradually bringing in talented people and strengthening his team.

“The concept I like and am trying to implement would allow us to be involved in world-class projects in an autonomous and decentralized way, no matter where we are. That is consistent with DAO's culture and the purpose of Web3, so we decided to make it true."

MIZU DAO’s launch in June 2022 meant that Takehito’s ideas turned into action. “MIZU" means "water" in Japanese. He explains the origin of the name as follows: “For Japanese and Asian people, water is taken for granted as the origin of everything, something that circulates and is essential to life. I want MIZU DAO to become indispensable to everyone involved in Web3, and convince people that it does not fight or exclude anyone."

He also dared to use the Japanese word "MIZU" in its name, saying, “There is an underlying respect for Japanese culture in the Web3 community, and many projects have names with Japanese roots, for example ‘Sushi’. Rather than calling it ‘Water DAO’, I thought the name ‘MIZU DAO’ would not only mean that Japanese are working on the project, but also that Japanese culture is highly valued in Web3." 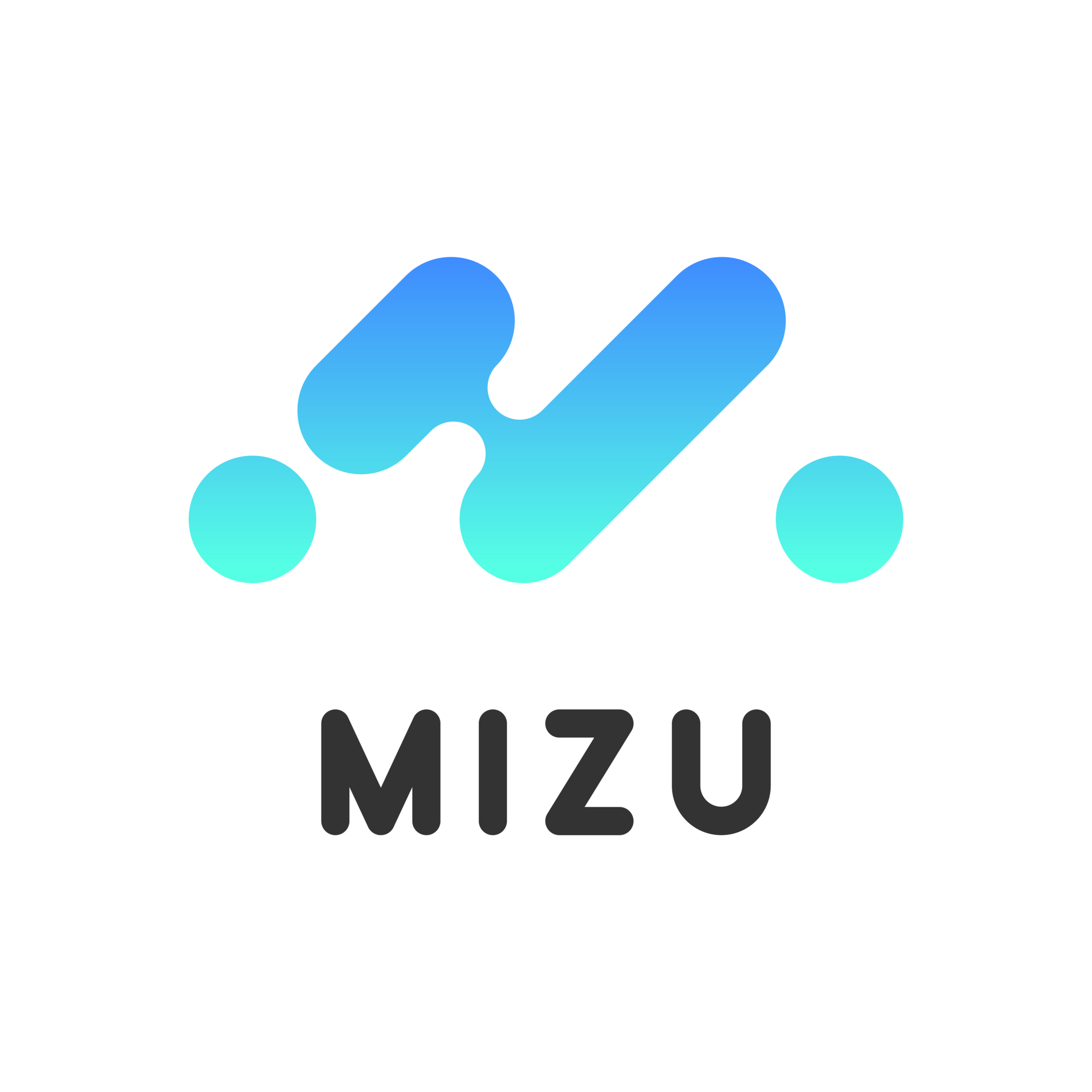 MIZU DAO has in its ranks a powerful veteran, Mr. Yuji Kato, one of the company's co-founders. He is the former Chief Investment Officer (CIO) of the Cool Japan Organization, a public-private fund established in 2013 to support development of overseas demand for Japan-made products and services.

“Mr. Kato challenged cross-border deals in the past and achieved impressive results despite many difficulties. He thinks young people should be the driving force in this business, but he wanted to share his experience and contacted us himself to see if he could help”, says Takehito.

MIZU DAO is leveraging its prowess in legal and accounting areas to assist listing on and partnerships with crypto exchanges. The company also takes advantage of Mr Kato's expertise in traditional investment and his business connections. 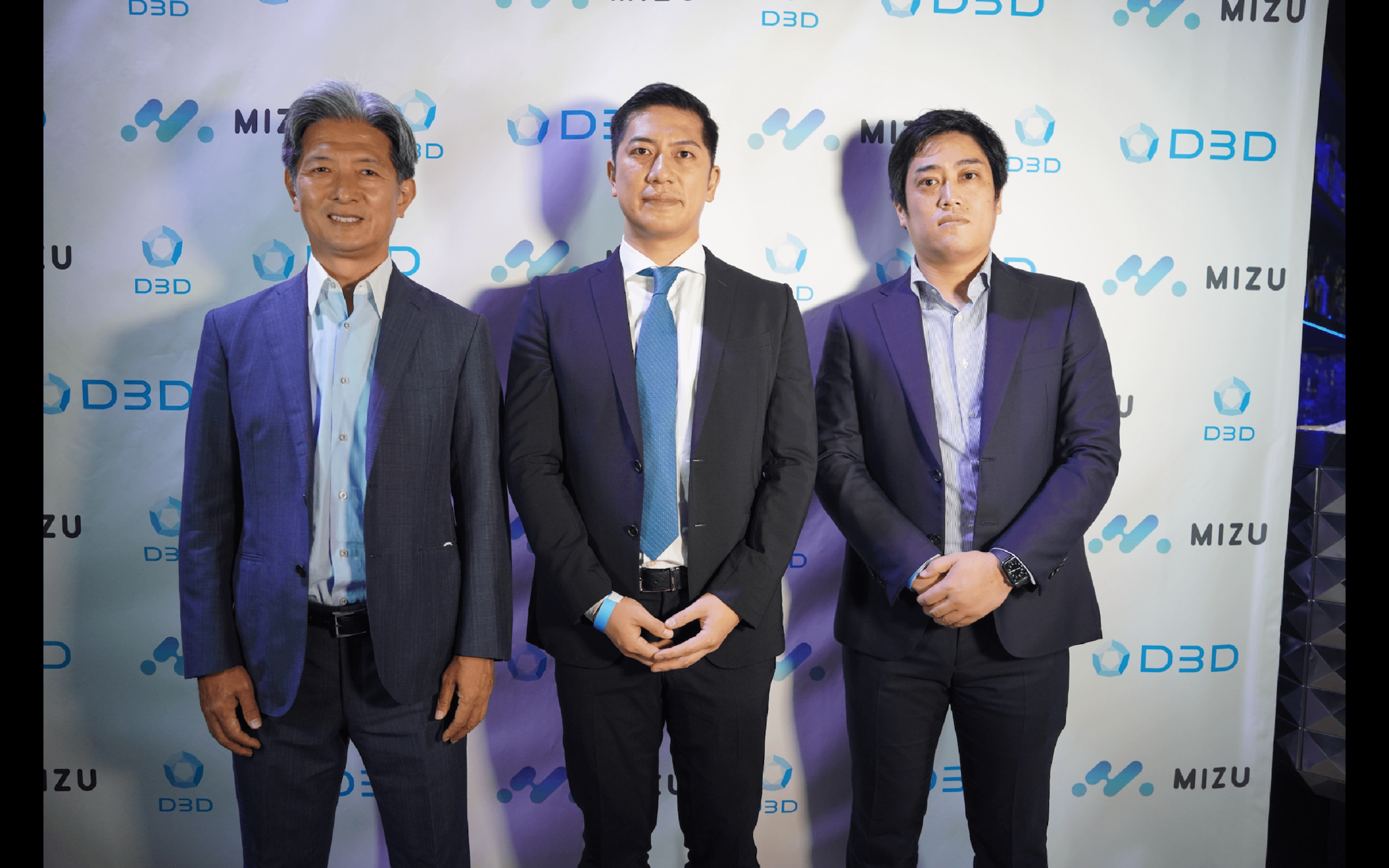 （Kato, Imai and Naito at the launch party of MIZU DAO at Ginza）

Investment areas MIZU DAO is particularly focused on are art and cutting-edge technologies.

Takehito has a strong passion for art. “From the perspective of passing something down to future generations, blockchain technology is highly valuable. Right now, it has a speculative meaning - NFTs are a good example. But the big issue is how to pass on to the future the masterpieces that artists created. As an intellectual property lawyer, I very well understand the challenge of documenting and conveying the achievements of humans in a traceable way, combining legal and tech expertise to give art a new form”.

He also believes that challenges and opportunities in the area of cutting-edge technologies are similar to those of art.

“Since ancient times, the concept of ‘art’ also included ‘science'. Artists, like Leonardo da Vinci, understand science, and scientists, in turn understand art. Art and tech are two sides of the same coin. The nature of inheritance is also similar. Even very talented technicians cannot do anything without budget and facilities. They cannot even survive. If other experts can help them with clarifying their rights and commercializing their technology, I think the value will be passed on."

Currently, Web3 has a variety of stakeholders. Takehito envisions MIZU DAO should play a leading role to help them work together. To achieve that requires, unexpectedly, the opposite of the digital world: the real-world community.

“Web3 has been trying to fundamentally redefine human behavior, leveraging technology to create a new world. However, it’s unrealistic, due to both mental and social structure, to suddenly move all our activities to a completely new digital world like the metaverse. Considering that, we're going to make our DAO alive and kicking by getting XP Group professionals involved in its activities."

“The key for success is to achieve a synergy between Web3 and the real world. Our advantage is having our community of lawyers and other professionals in the real world." 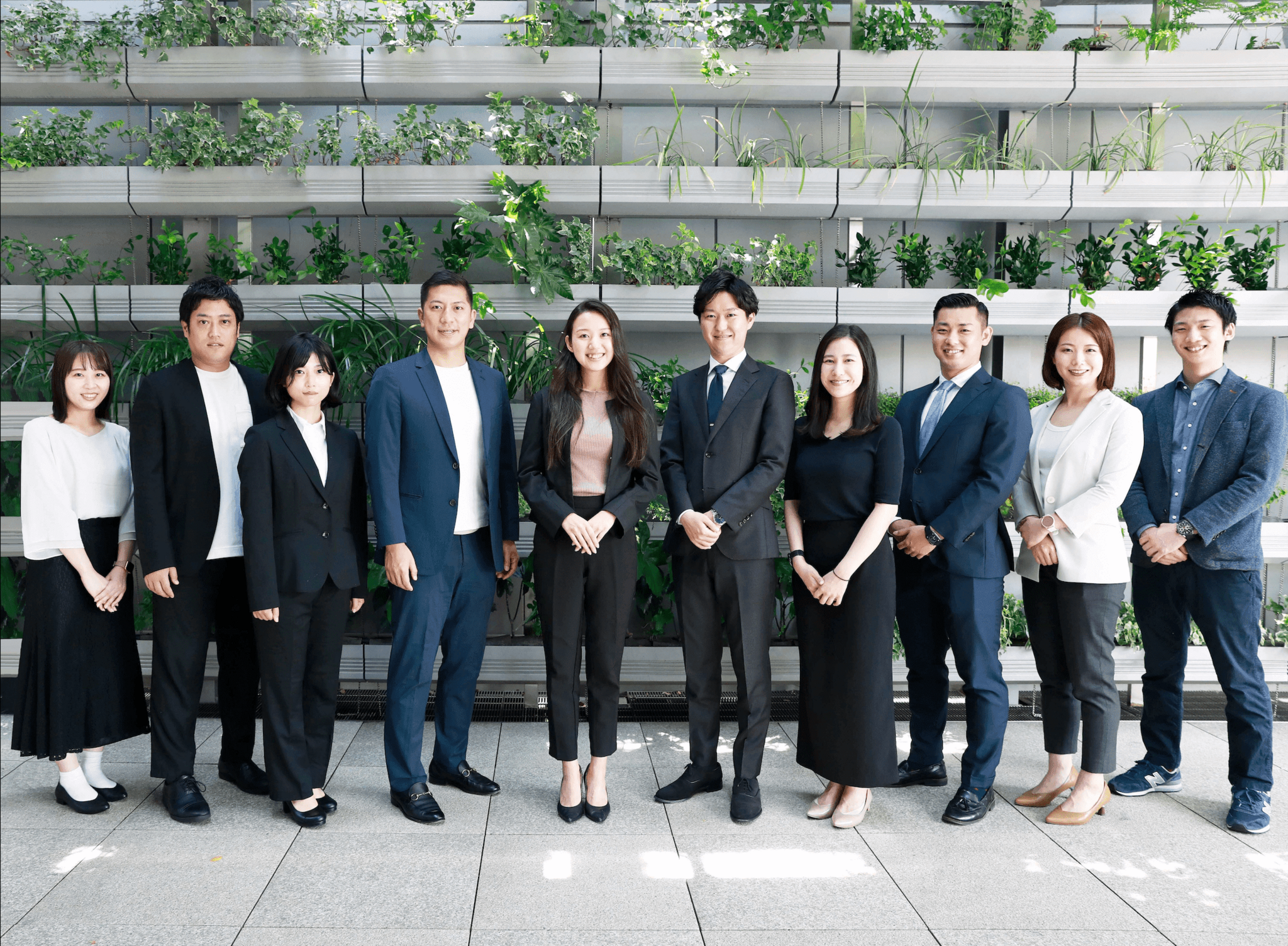 （A group photo of XP professionals）

Takehito chose Singapore and Ginza as bases for expanding that community.

“Singapore has a global community with various cultures and ethnic groups living side by side. I felt their passion myself at the Token 2049 event. A person with a Japanese background, I hope to make that community even bigger.”

“Ginza is a window to the world. The place where tourists always go to see the real Tokyo and Japan. I want Ginza to be the ground where people of the world interested in Japan and Japanese people interested in the world come to meet each other."

Takehito is going to pursue the goal of expanding the overall Web3 market and further increasing acceptance of Web3 in society. He’s motivated by the sense of responsibility and frustration with the current state of Web3.

“The more I get involved with the Web3 community, the happier I feel to be Japanese. On the other hand, I think that Japanese culture could be discussed in more detail if it were explained by a Japanese person or someone with a background in Japan.”, he says.

Art-savvy lawyer and entrepreneur, Mr Imai has just started his new engagement with Web3. The last question we asked was about his lifelong dream. The answer was:  “Prime Minister”. After leading MIZU DAO aiming to become the key player of Web3, one day we will probably see him as the leader of Japan as well.